For this search criteria there is no result.

The aim of e’LivingLab, the Living Lab created by espaitec -Science and Technology Park (STP) of Castellon (SPAIN)-  is to provide diverse scenarios for the companies linked (physically or virtually) to the STP to design, develop and test their products in the most real environment: the University Campus together with R&D groups from the University, others companies that can create some sort of synergies among them, Local and Regional Governments and citizens.

The most important capability of our LL (e’LivingLab) is the fact that it is created by a Science and Technology Park to foster the hybridisation among all the LL participants not only the interaction between companies and clients, and that characteristic is the one that become special to our LL.  The creation of an environment where different companies and R&D groups (from the University and from companies as well) are designing and developing products with the co-creation user support sparks the interaction among all of the to generate more extreme innovation in the point of time where new synergies are created.

The Science and Technology Park (STP) becomes a great place to grow so the most suitable arena to promote the innovation among the companies involved (physically and virtually) on the STP based on our octagonal ecosystem of innovation and the Living Lab is a great mechanism to do it. We are using the example of our e’LivingLab in terms of a Convoy Project as the “glocal” growth accelerator of the Cluster Model by Porter.

The scope of espaitec, as Science and Technology Park of Castellón, is extended to the whole Castellón province. The e’LivingLab Phase 1 only will be built on the University Campus (15,000 students and 2,000 researchers as potential users) however, the aim of e’LivingLab for further stages is to extend its activity to the rest of Castellon city and later on to the province in order to build Smart Cities and Smart Provinces.

e’LivingLab Phase 1 will be running on the University Campus and designed mainly for the University citizens. We have designed a set of projects that will help to improve the quality of life at the Campus:

As of today, e’LivingLab is running under several overlapped stages:

1.- On the one hand, it is been built the infrastructure required to design the first six project (these are for the Phase 1 of e’LivingLab, for further Phases more projects will join us): for instance, high-speed network (1Gb) to ease the development of new services and products and high-technology devices.

2.- We are working in the developing of a Living Labs Methodology to be applied to all the projects running at the e’LivingLab that will help to establish Key Performance Indicators (KPI) that will support the positive impact of the LL in the society (local, regional and even national one)

3.- In parallel to stage 1, all the companies are designing their products based on the requirements of the clients of the e’LivingLab.

As it has been mentioned before, e’LivingLab becomes a Convoy project for espaitec, Science and Technology Park, because we are aware that LL is the best resource to generate wealth to the region, to generate extreme innovation helping to our companies installed at the STP.

For us, the Phase 1 of e’LivingLab is the “proof of concept” for all local and regional (even the national) governments, companies and investors to demonstrate them the effectiveness of a Living Lab as a mechanism to improve the quality of life of our citizens and socio-economic wealth. That will be our critical success factor. 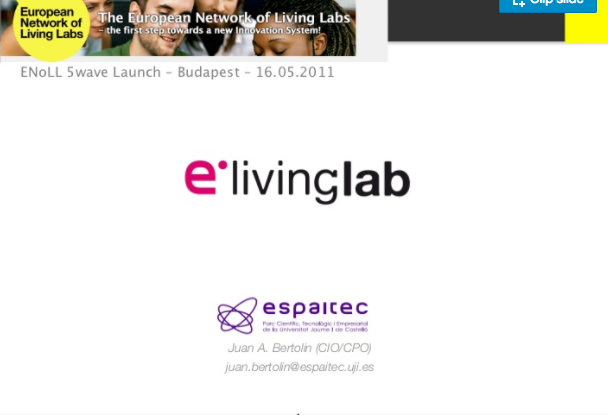 Since its formation in 2006 ENoLL has labelled 440+ Living Labs. See the full list of Labelled Living Labs who are not active members of the network.